Kids are out of school and antsy for some adventures. Parents will be wanting to find a balance between fun summer activities and continuing their children’s education outside the classroom.

These kid-friendly hikes outside of Harrisburg, Pennsylvania, from the upcoming book 60 Hikes Within 60 Miles: Harrisburg, combine a perfect mixture of hiking and history. Like sneaking veggies into cupcakes, your kids won’t even realize they’re getting the opportunity to bring their history books to life.

This hike follows the paved Jonathan Eshenour Memorial Trail beneath a canopy of tall tulip poplars into Shank Park. Upon entering the park, the nature trail departs from the Eshenour Trail and makes a loop around the perimeter of the park.

The nature trail here follows the Eshenour Trail along the path of the old Brownstone–Middletown Railroad Grade. Originally a wagon road used for transporting brownstone blocks from quarries west of Waltonville Road, the railroad was developed along this path because breakage of the stone was too common when hauled by wagon. In 1892, a standard-gauge railroad was built that hauled the stone for approximately 3 miles to the Reading Railroad in Hummelstown. The railroad was rather short-lived, ending operations in 1939 when brick became a cheaper alternative to quarried brownstone. The railroad bed is now a lovely paved walking trail that climbs gently up Bullfrog Valley, parallel to the course of the small Bullfrog Creek. 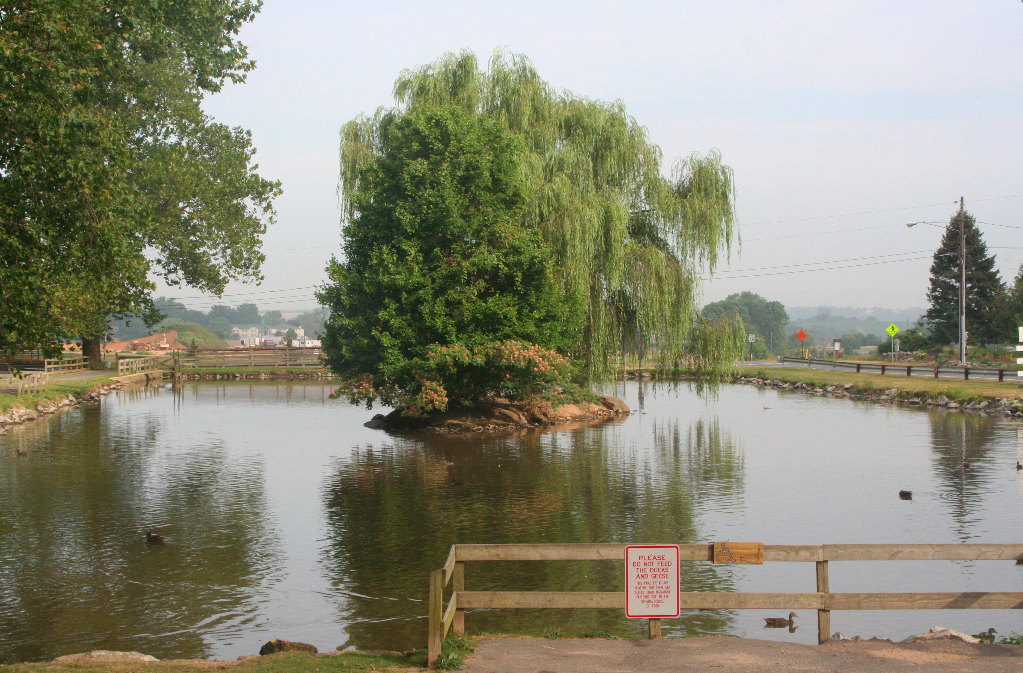 Located in western Perry County, the Hemlocks Natural Area is a 120-acre tract of land that is home to a stand of virgin eastern hemlock trees. The extent of the natural area is located in the steep-sided ravine through which Patterson Run flows, and in all likelihood this stand of trees was saved from the bite of the saw by the topography. According to the information brochure provided by the Tuscarora State Forest, the oldest trees date back 280 years. Many of them measure more than 2 feet in diameter and more than 100 feet tall. Some of the trees are absolutely huge, and few places exist in the east where you can see trees with the stature of these hemlocks.

In 1973, the natural area was designated as a National Natural Landmark by the National Park Service. In addition to the hemlock, you will also find white pine; several varieties of birch, maple, and oak trees; and a healthy understory of mountain laurel, Pennsylvania’s state flower. Visiting the natural area in late May and early June will give you the opportunity to see the mountain laurel in bloom. 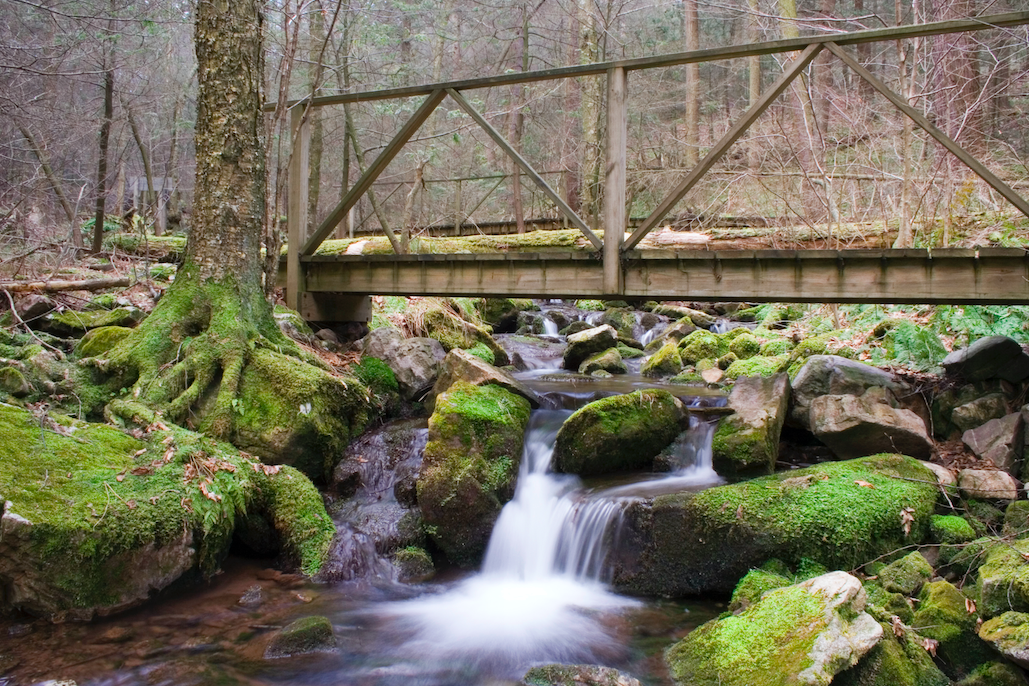 This easy hike traverses an old railroad grade that extends into Lebanon County, following the path of the Conewago Creek and passing by some beautiful corn and farm fields. It is especially pretty late in the day when the sun is low.

For its length, the Conewago Trail follows the bed of the old Cornwall and Lebanon Railroad line alongside Conewago Creek, which flows just north of the trail. The Cornwall and Lebanon Railroad was built in the 1880s by iron magnate Richard E. Coleman, who used it to haul iron ore from his furnaces in Lebanon County to the mills in Steelton on the shore of the Susquehanna River. The rail line was abandoned after the floods from Hurricane Agnes in 1972. In 1979, Lancaster County acquired the land that the railroad line followed and, in 1981, converted the land into a hiking and biking trail. 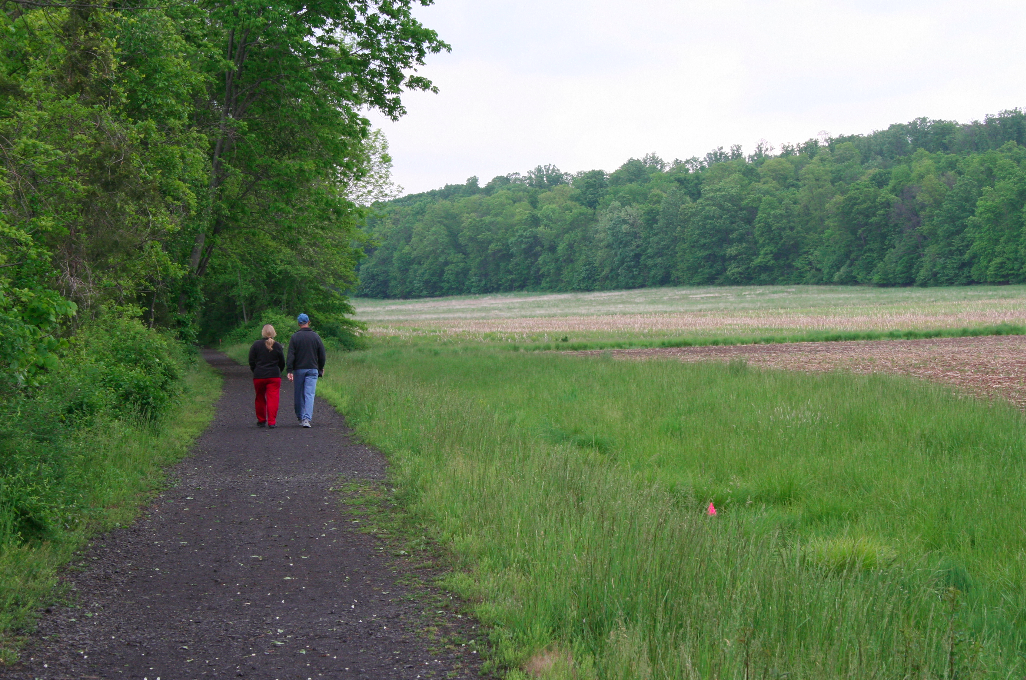 This pretty hike initially follows Mill Creek as it meanders throughout the park before it joins the Equestrian Trail and passes some of the recreation areas in the park.

The park is also rich in local history. In 1979, an ancient Indian burial ground was uncovered north of Golf Road near the microwave tower that this hike passes by. Robert Fulton conducted his first tests of the paddle-wheel boat on the Conestoga River, which composes the northwestern boundary of the park. And one of the park byways, General Hand Lane, is named for Edward Hand, George Washington’s adjutant general, whose home is preserved in the park at the site of Rock Ford Plantation near the intersection of General Hand Lane and Williamson Road. 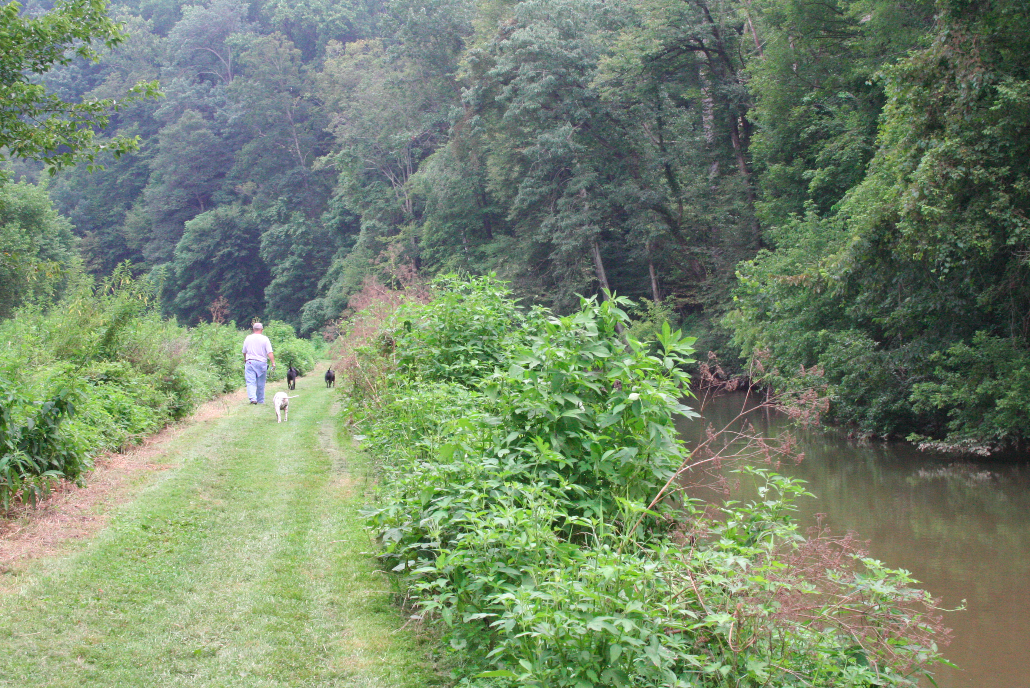 Following the white-blazed Mary Ann Furnace Trail, this hike makes a loop through the woods along the southwest shore of Lake Marburg. The lake is home to a large and varied population of waterfowl, and it is quite common to see Canada geese, wood ducks, teal, and herons along its 26 miles of shoreline. The park’s woodlands are home to deer, pheasant, rabbits, squirrels, and other small game.

The hiking trail is named for the Mary Ann Forge and Furnace that was located on nearby Furnace Creek, the westernmost feeder stream to Lake Marburg. The furnace was founded in 1761 by Mark Bird and George Ross, an attorney from Lancaster, Pennsylvania, and a signer of the Declaration of Independence. The furnace produced cannons, cannonballs, and shot used by the Continental army under George Washington’s command. A historic plaque was erected at the site of the Iron Master’s house on Black Rock Road near the trailhead by the Daughters of the American Revolution in 1949.

Get the map here. 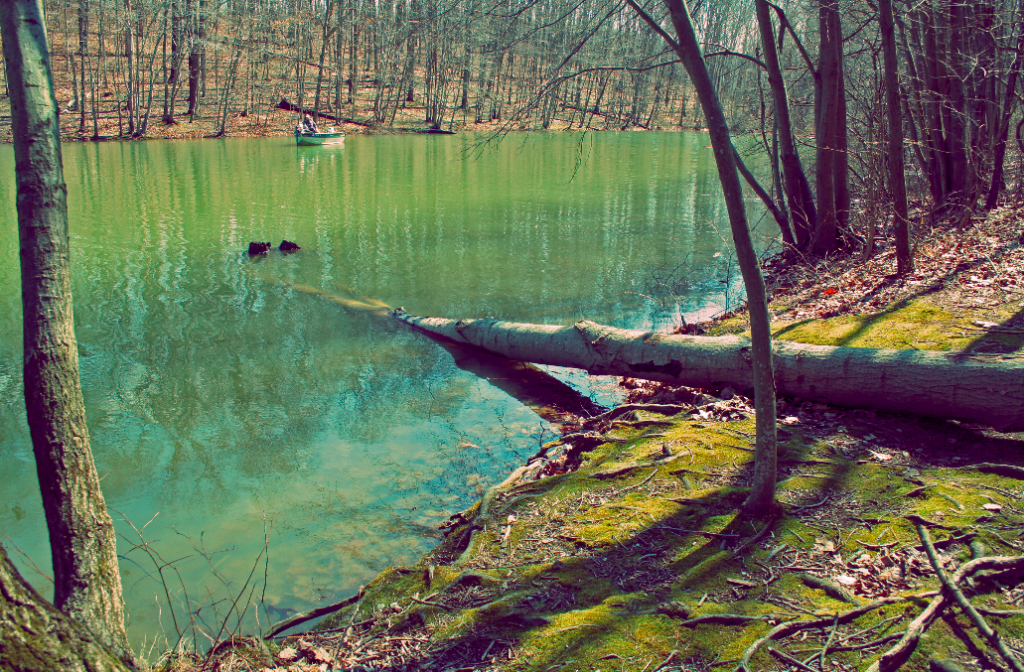