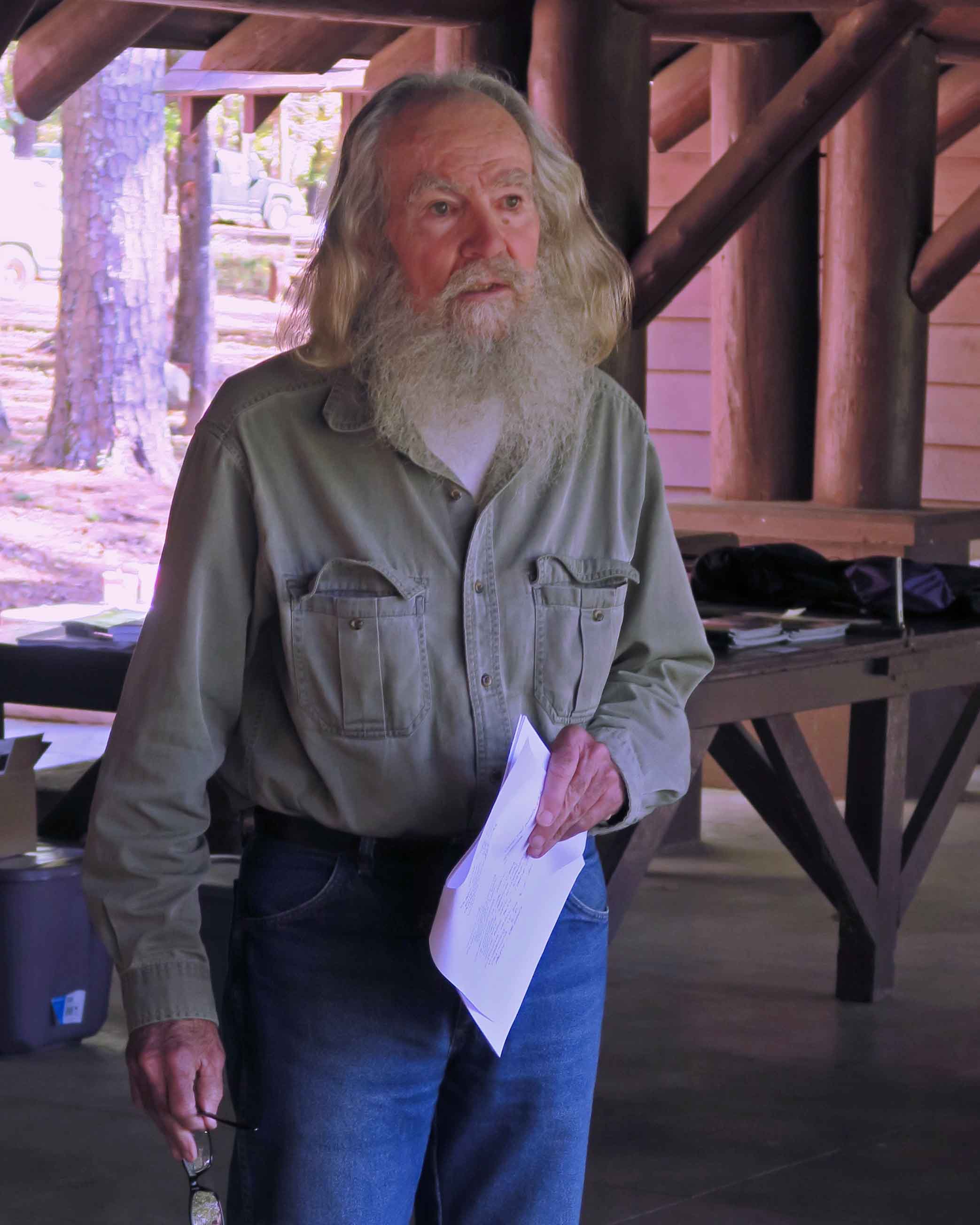 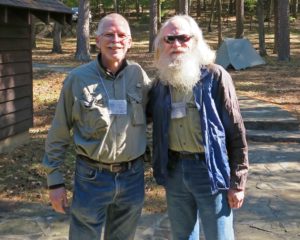 Jim Warnock and Nimblewill Nomad, both Menasha Ridge authors, meet in the Ouachitas.

Would I like to schedule a book signing in Northwest Arkansas on October 22 or drive into the Ouachita Mountains and meet Nimblewill Nomad? The answer was easy! Saturday morning, Hiker-dog and I hopped into the Jeep and drove 125 miles south, arriving at Shady Lake by 10:00 a.m.

Backpacking Arkansas (BPA) began as a web forum where hikers share knowledge, serve the trails, and draw inspiration. Once a year, an event is held where a portion of members of the forum meet and greet and share educational sessions.

When we arrived, Gerry helped me sign in. He recognized my forum name and asked about Hiker-dog. Turns out he has followed our trail stories, so it was fun to put a face to a blog name. Nimblewill was scheduled for the afternoon. We enjoyed a first aid session before breaking for lunch. 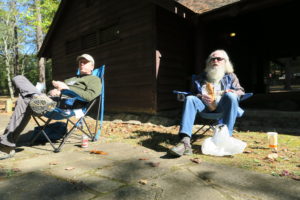 Lunch in the sun

Randy, a fellow board member of the Ozark Highlands Trail Association (OHTA), was present, and so we sat in the sun and had lunch with Nimblewill, who’d driven down from Independence, Missouri. 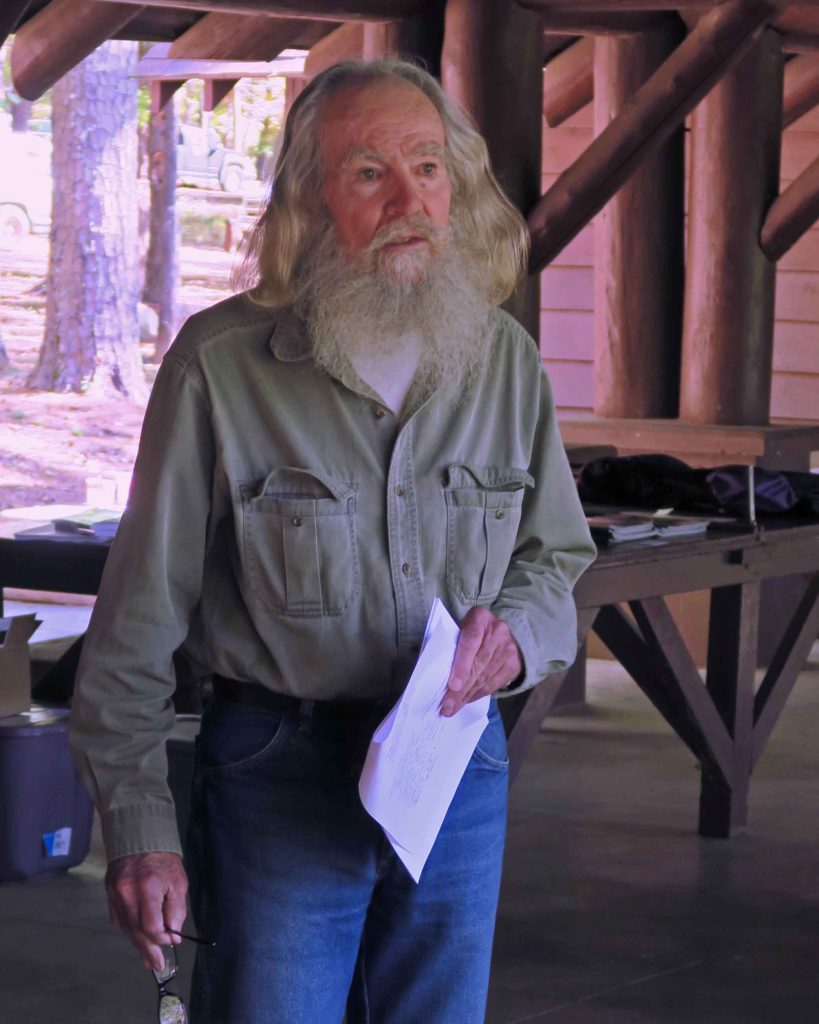 Nimblewill began his session with a challenge to those present. He said the beauty of Arkansas and Missouri is on par with mountain regions anywhere in the United States and that a combined Ozark Highlands Trail in Arkansas and Ozark Trail in Missouri, or Trans-Ozark Trail (TOT), would meet the requirements for a National Scenic Trail. He even mentioned that the Ouachita Trail could eventually be tied into the long trail leading to Saint Louis, Missouri. He said that many of the great trails in the country involve some road walking to follow so connecting the Ouachita Trail would be a possibility.

Nimblewill’s session was laced with poetry. He used poetry to express ideas that might have been more difficult in narrative. In the following poem he describes the wanderlust many distance hikers feel.

Watch Nimblewill deliver his poem, “Home of the Free.”

I won one of his books, Ten Million Steps. It’s his journal of his trek from the Florida Keys to Quebec, Canada, laced with poetic interludes and a real pleasure to read. I already owned one copy but this one was signed, and you can never have too many books about hiking and trails.  My book, Five Star Trails: The Ozarks, was presented as a door prize at the end of Nimblewill’s session. It made me feel good to know that we were both published by Menasha Ridge Press. 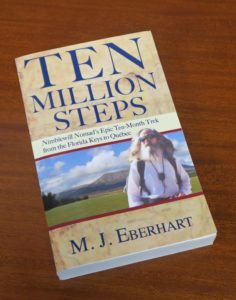 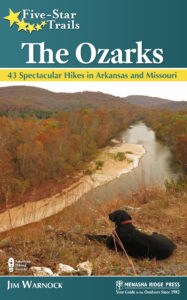 Nimblewill is in his late 70s and still planning long walks. His next goal is to walk Route 66 from Chicago to Los Angles. One of the big challenges is getting waivers to walk some sections of Interstate Highway that cover the old route. Some states have laws forbidding foot traffic. Over morning coffee Sunday I suggested he get some type of slow vehicle permit. He walks around 3.5 miles per hour and is powered by two legs. 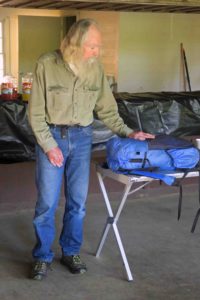 Nimblewill described the contents of his ultra-light pack. He said the task has been to bring his wants and needs together so that only what is necessary can be found in his pack. 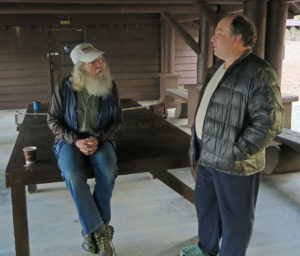 Nimblewill and Paul visiting while waiting for morning coffee.

Sunday morning, I was up early and had the pleasure of some time with Nimblewill. He shared some of the logistical challenges of his Route 66 trek planning. I have no doubt that he will walk the length of Route 66. I hope the states he passes through facilitate his travels because they’ll have one kind soul walking their roads while he’s passing through. 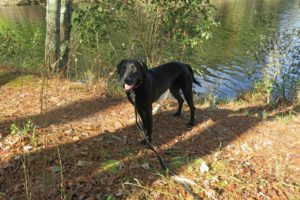 Hiker-dog wanting to hit the trail

Sunday, after breakfast, I thought of heading back home, but my little buddy had been so patient the day before, and now she was urging me to take the 3-mile trail around Shady Lake, one I’d not hiked in more than 20 years. 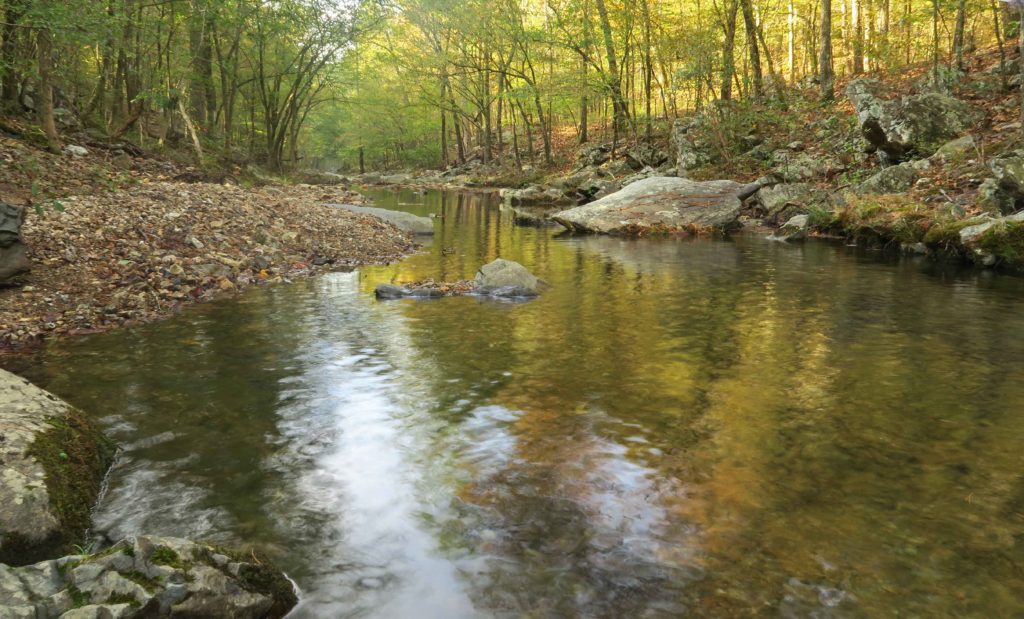 Small stream flowing into Shady Lake with hints of gold color in the foliage.

As always, following Hiker-dog’s lead was wise. We both felt much better from the after-breakfast exercise, and we saw some of the beauty of the Ouachitas. The old trail around Shady Lake had some spots that were hard to follow. I started down what I thought was trail and noticed Hiker-dog up above me. Once again, she was right, so I backtracked and followed her lead. 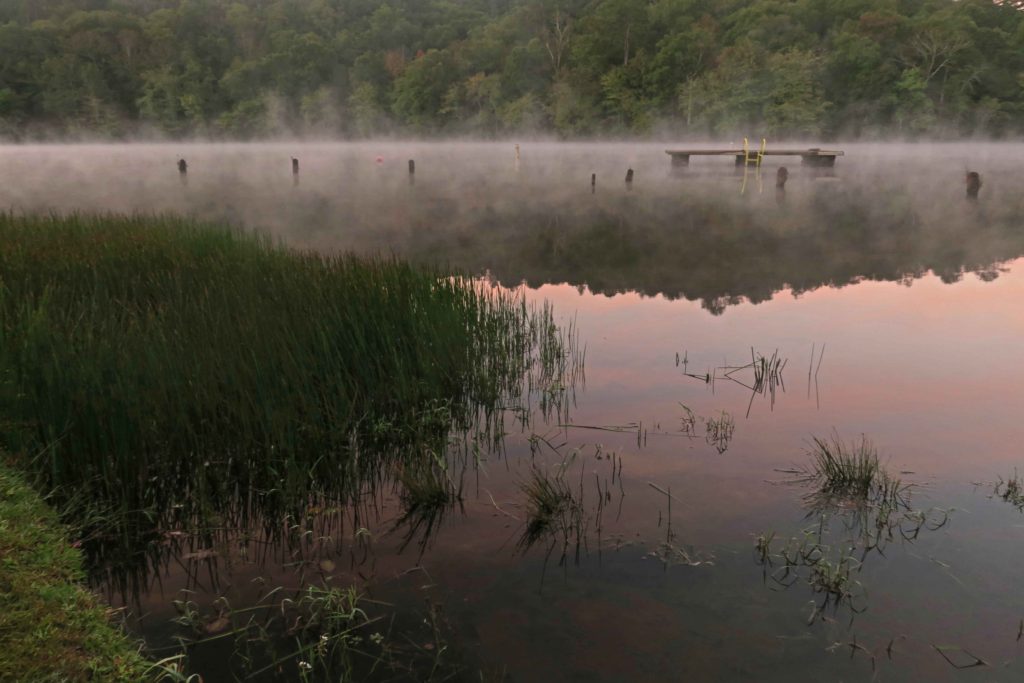 Shady Lake in the morning light

A big thank you to Backpacking Arkansas for putting this event together. Thanks also to Duane, Paul, Gerry, and others who worked to make this event possible. All presenters were excellent, and the Saturday night potluck alone was worth the drive. I’ll definitely put this event on my calendar for next year!