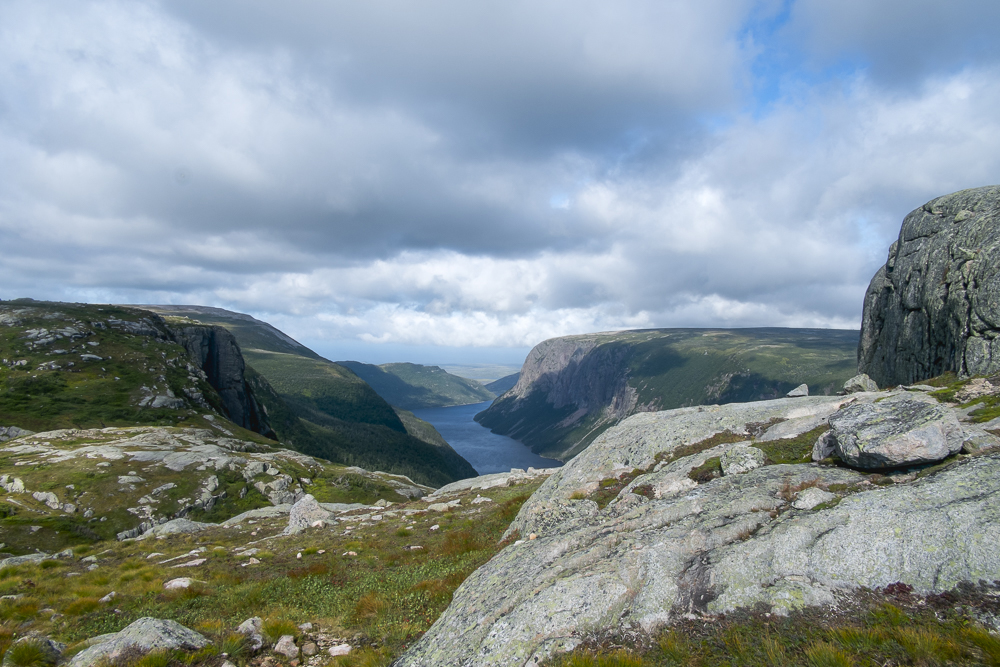 A Little More Appalachian Trail, Anyone?

During the past couple of years, I have grown quite fond of traveling to Newfoundland and Labrador (NL). It isn’t the easiest place in the world to get to. You either have to drive to and then ferry from Cape Breton, Nova Scotia, or fly to St. John’s, NL, and rent a car there to get around. When you are there, however, you will without fail encounter some of the most spectacular coastal scenery and meet some of the friendliest people anywhere in the world. 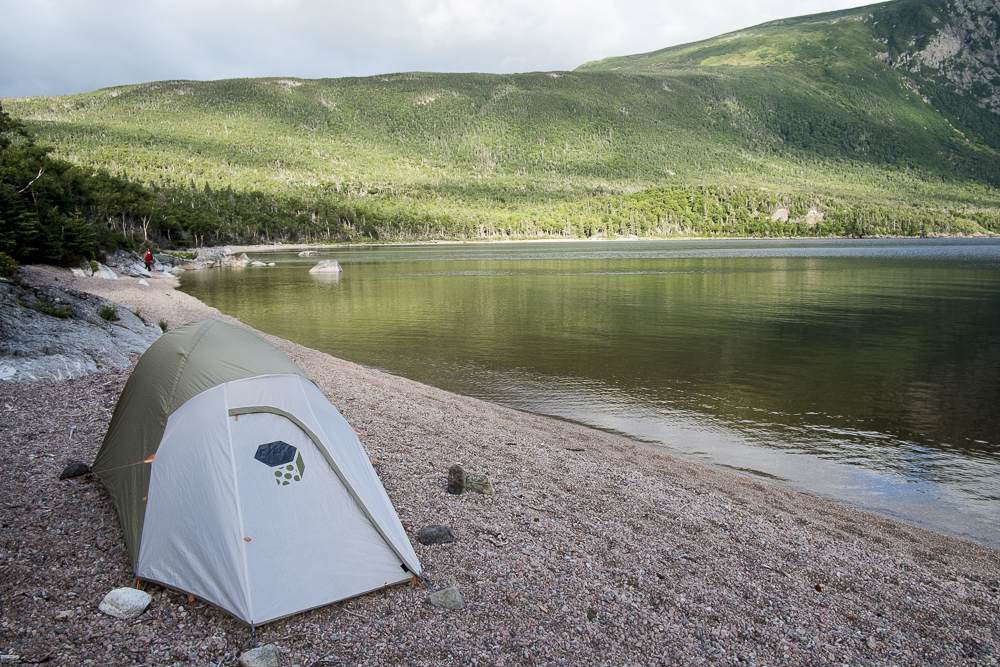 The summer before last, a friend and I made our way over to Gros Morne National Park, on the west side of Newfoundland. Gros Morne is located in the Long Range Mountains. It is interesting to note that this range forms the extreme northern end of the Appalachian Mountain chain. In fact, most Appalachian Trail hikers from the U.S. are not even aware that, beyond Maine, there is still more. The Newfoundland/Labrador section of the International Appalachian Trail (IATNL) begins at Port aux Basques, NL (the western terminus for one of the ferries), and follows a network of trails as far north as Crow Head, NL, which is located just to the east of L’Anse aux Meadows, the oldest Viking Settlement discovered in North America. 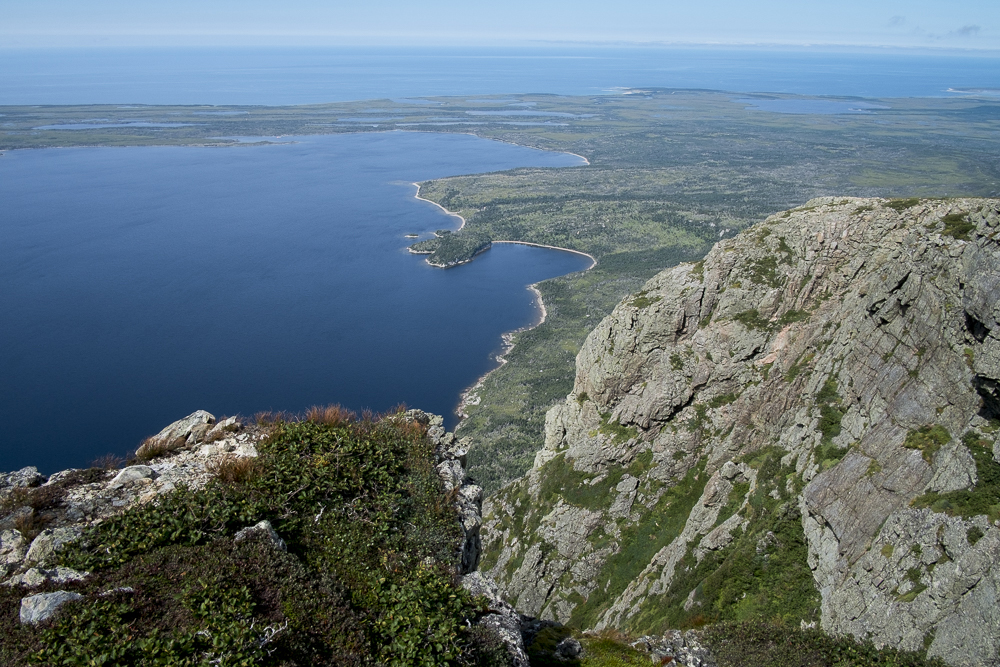 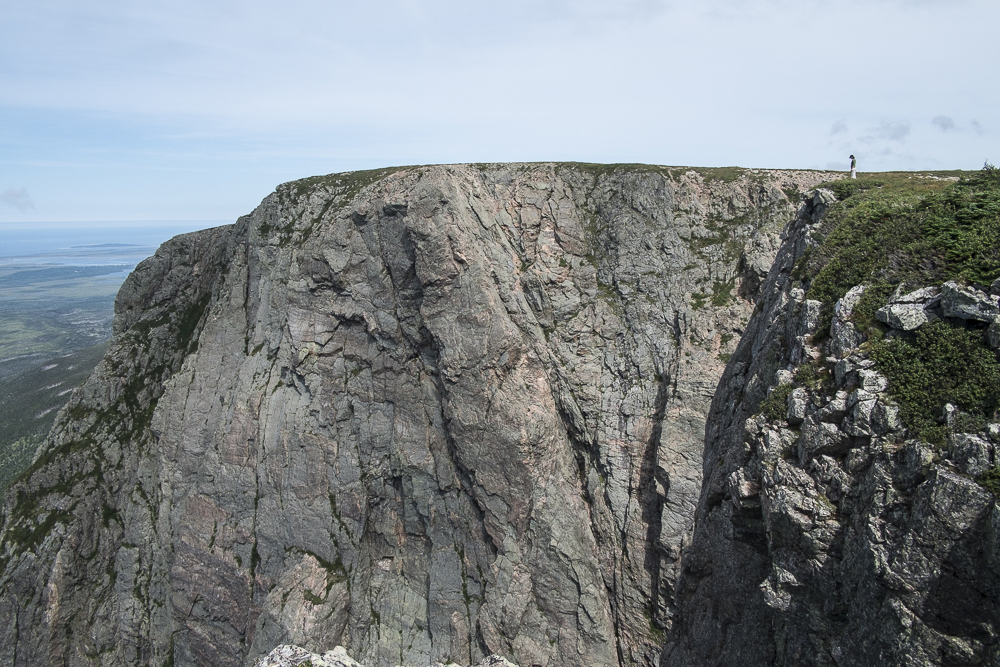 Alternately, you can extend the hike another three or four days and 27 km by skipping the boat shuttle and hiking around Western Brook Pond via the North Rim Traverse (so named because it, ostensibly, follows the north rim of the pond). My partner and I opted for this latter option and gave ourselves 10 days to do the trip. I would have to say that it is one of the most spectacular, wild, and remote wilderness treks I have ever done. And I was glad that we planned in a few extra days because it is hands-down the most challenging wilderness trek that I have ever done. The additional days gave us time to explore—and to take our time dealing with difficult navigation and rugged terrain. 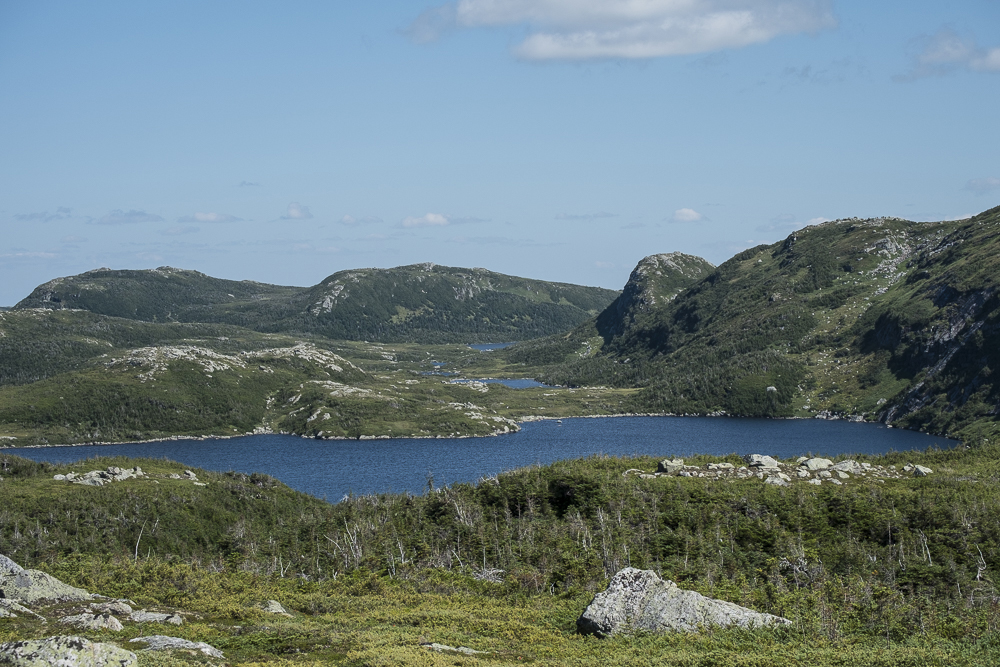 Navigation is certainly a significant facet of this backcountry excursion. You need to be competent with map and compass skills, especially if you do the North Rim Traverse. It is not a good place to be relying on a GPS, only to have it breakdown. We did not have a GPS with us on our trip, nor did we feel we needed one. But the terrain is tricky with a lot of very subtle contours and valleys. There are few distinctive peaks off of which you can take a bearing. The maps are created on a 1:50,000 scale; people used to navigating with 7.5 minute series topographic maps with a scale of 1:24,000 will find the difference disconcerting. Moose paths are constantly crossing the main footpaths, and you will invariably spend time trying to discern one type of path from the other. And the fog can be intense. 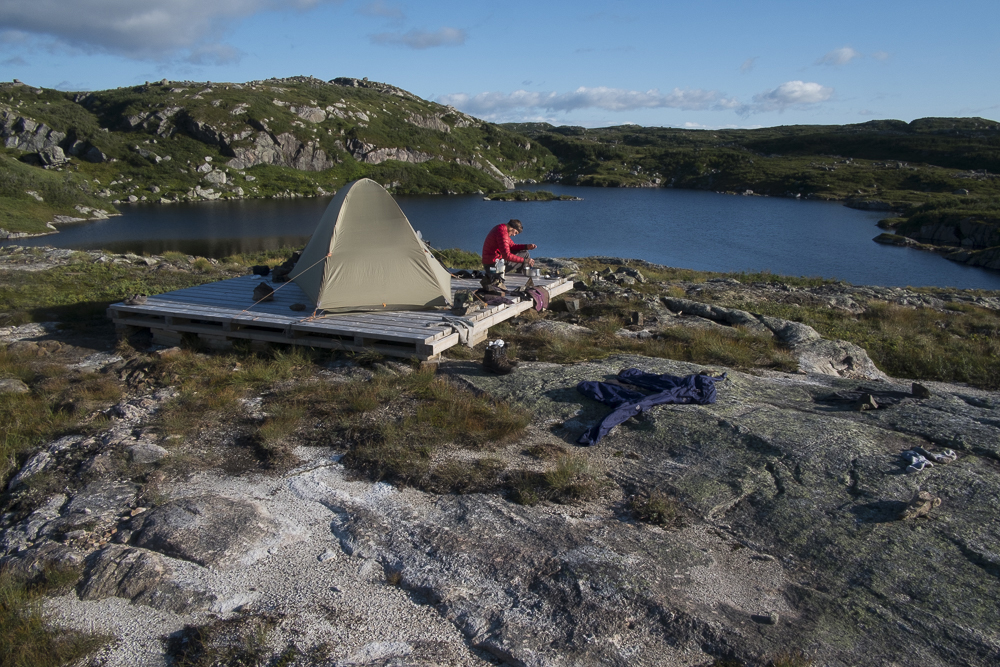 You must make reservations in advance and purchase a permit (in 2016 the fee for the full North Rim/Long Range Traverse was $122.60 CND per person). The cost of the permit includes the loan of SPOT locator beacon (you can get very lost in Newfoundland). When you pick up the permit, you’ll need to take a mandatory park and backcountry orientation and pass an exam that will evaluate your map and compass skills. 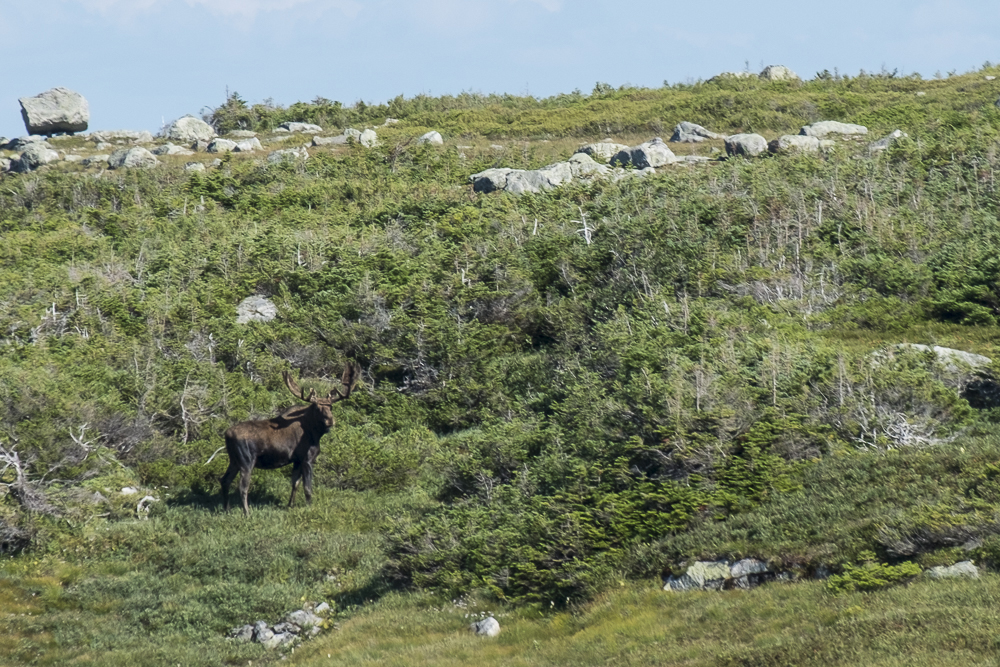 If you have the requisite orienteering skills and a good bit of wilderness hiking experience, then this is an incredible trek. On the North Rim Traverse, we encountered stream fords; dense thickets of red, ripe raspberries; spectacular views over Western Brook Pond; caribou; moose; ptarmigan; trails that wandered off to nowhere; trails that appeared as if from nowhere; no trails at all; remote and uninhabited valleys that in other places would support entire resort communities; and more than just a little tuckamore. Tuckamore can be a significant part of the North Rim experience; it is a dense, interwoven, and matted forest of stunted fir and spruce trees that is nearly impenetrable. You can’t go under it; you can’t go over it; and there are times when you just can’t get around it. In that situation, think like a moose and look for a moose track through it. Inside a stand of tuckamore is not a good place to be in short pants. 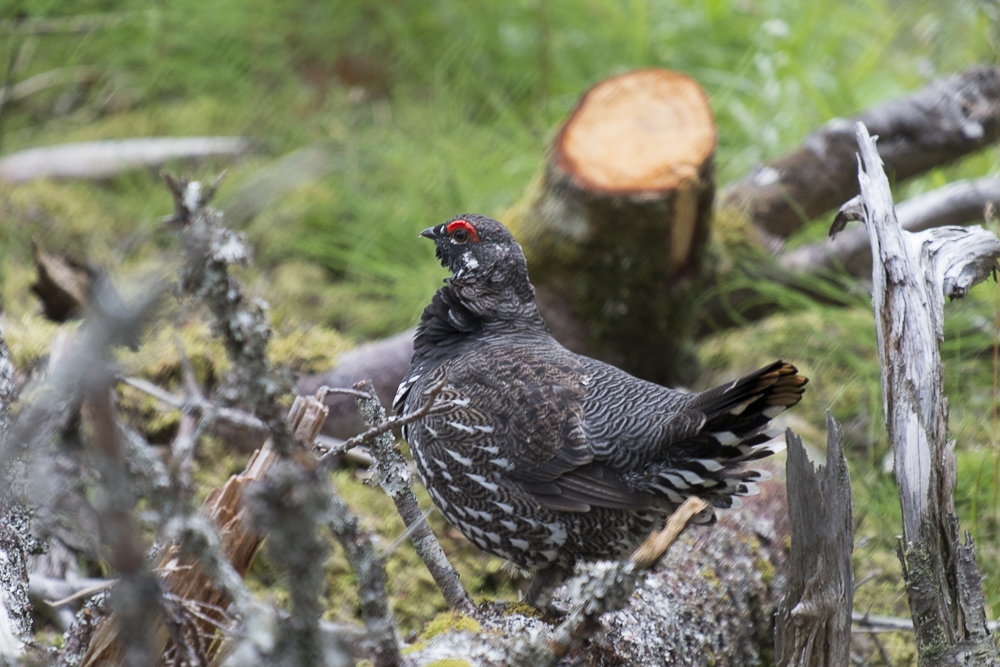 The Long Range Traverse is not quite as difficult as the North Rim Traverse. The main path is more distinct, but it still has its share of moose trails with loads of boot tracks on them heading off in directions that you’re not supposed to go. We also discovered quite a few bogs, one of which consumed my entire leg, right up to the hip. And several sections of the path are quite steep, especially the descent into Ferry Gulch below Gros Morne. But the scenery! And the blueberries! And the multitude of stars at night! The south end of the trip joins the trail to the summit of Gros Morne. At that point, you’ll see plenty of people, and I would recommend not camping at the pond below Gros Morne. 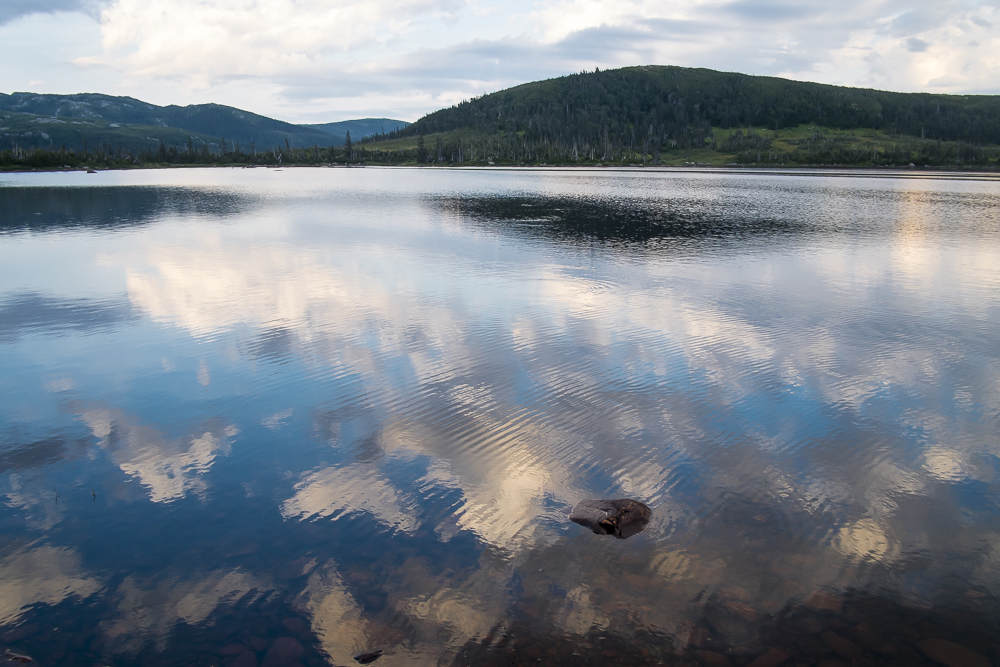 I would, however, recommend the following campsites on the trip, from the north: Snug Harbour (the two Adirondack chairs provide an excellent vantage point from which to view the pond at sunset); the large unnamed pond directly east of the Western Brook Pond overlook; Gilley Pond; Marks Pond (quite lovely with some nice day hikes); and Green Island Pond (there are additional tent platforms above a small pond just south along the trail). These are all marked on the main park map that you will use to plan your itinerary. All of the sites have bear boxes and most have tent platforms. Information about the trek is available at the park’s wilderness hiking website. Read the information carefully before planning your trip. 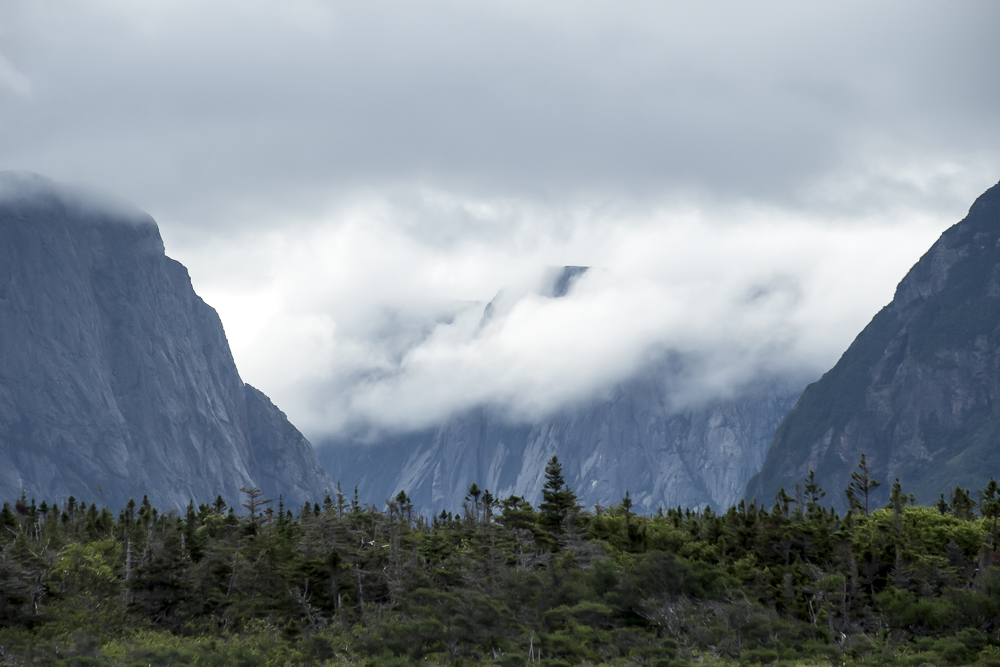