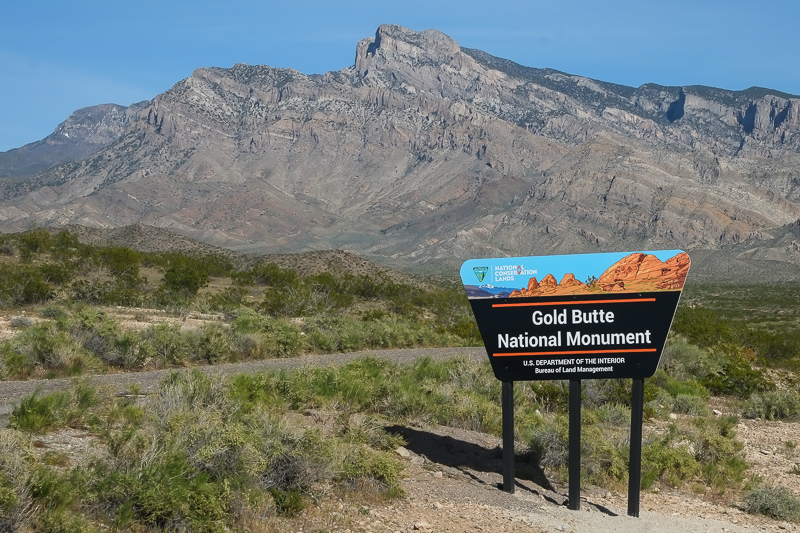 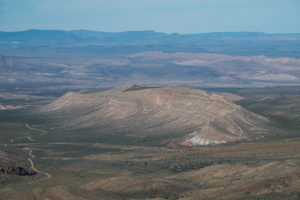 On December 28, 2016, in one of his last actions in office, President Obama used the 1906 Antiquities Act to create two new national monuments. One of these, Bears Ears in Utah, has received considerable attention because of recent conflicts about its status as a national monument. The other, Gold Butte, has received rather little attention, until recently at least. In 2014, the Gold Butte area was the site of the “Bundy Standoff,” a dispute between land owners and the federal government over changes to grazing regulations. 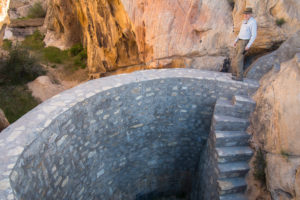 A catchment dam built into a small slot at Whitney Pockets

Supported by the efforts of groups like Friends of Gold Butte, as well as Senate minority leader Harry M. Reid of Nevada, the designation of the land as a national monument protects the area from the development of private interests and preserves the land as the site of significant natural, cultural, and historical interests. Gold Butte National Monument has sites that attest to the wealth of all three interests in the area. 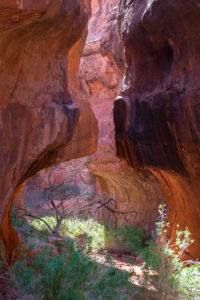 A couple of friends and I made a trip to Gold Butte for two weeks at the beginning of April to explore the region and to see what it had to offer for camping and backcountry exploration. What we found was quite exciting and beautiful.

Located in the Mojave Desert about three hours east and north of Vegas, the monument consists of about 350,000 acres of desert terrain at altitudes from around 2,000 feet to about 8,000 feet in elevation. Aside from the main access road from Interstate-10, most of the other roads in the monument require high clearance or four-wheel drive vehicles. The campgrounds are primitive, so you’ll need to bring all of your supplies with you, including those for dealing with waste. Water sources are scarce and unreliable at best. So you’ll need to bring at least a gallon of water per person per day. This is all to say that a trip to Gold Butte brings you into some very remote desert country. 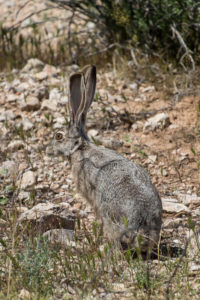 Jack rabbits are quite common throughout the monument.

My sense is that even though there is much backcountry to be explored at Gold Butte, the place is especially well suited for day-long expeditions out of a base camp at your car. The lack of water would make carrying enough for more than a day or two a rather dim undertaking. Currently, most of the visitors to the monument appear to be RV campers towing ATVs behind them. Nearly all of these people camp at or around the Whitney Pockets area, which is located at the end of the paved road about 31 miles south of Mesquite. Whitney Pockets is an area of red and white sandstone outcrops in the desert floor at the foot of the nearly 8,000-foot Virgin Peak and the surrounding Virgin Mountains. Even though Whitney Pockets is the most popular area to camp, the sites are far enough apart that you won’t encounter neighbors if you don’t want to. And the ATVs tend to stick to main roads. 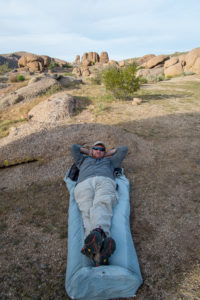 Camp at the Gold Butte town site: There’s not much need for a tent in the desert.

The Gold Butte town site is located 19 miles south of Whitney Pockets along the dirt Gold Butte Road. There are several camps in this area as well. From here you can access the Jumbo Peaks and Lime Canyon Wilderness areas. And there are many, many opportunities for day trips from Gold Butte. Some recommended hikes in this area include ascents of Gold Butte and Mica Peak; a trip out to the Black Jack Mine and the Paradise Valley; Lime Canyon; and explorations of the Jumbo Peaks area.

The geology in this part of the monument consists of coarse granite outcrops not unlike what you would find at Joshua Tree (in fact, there are many, many Joshua Trees in the monument) or at Vedauwoo, Wyoming. It seemed to me an area that’s ripe for rock climbing, especially in the south end of the Cedar Basin. Around the granite are limestone ridges and peaks, which form the dominant features of the landscape. From Gold Butte at night, you can see the lights of Las Vegas almost 100 miles in the distance. More interesting, however, are all of the ranges that reach off to the west, as well as the stars at night.

From the town site, you can complete a loop back to the north part of the park via a rough dirt road. A dozen miles or so north of Gold Butte, before you reach Red Bluff Spring, you’ll get back into the sandstone regions again, and these are especially worth exploring. Most of the outcrops are bisected by many short canyons and crevasses where you will find all sorts of plants, a fair share of animals, and plenty of petroglyphs. Another popular camping area is located along the northern stretch of the loop off of the Mud Wash Road at Little Finland near Red Rock Spring. It, too, is an area full of sandstone fins and canyons where you can spend hours, even days, wandering around and exploring.

We were fortunate enough to have timed our trip with the full bloom of the desert spring. I’ve spent a lot of time in the desert, but I have never seen anything like the desert this year. Everything was in bloom, and the whole monument seemed like the biggest desert botanical garden you could imagine. I’ll include some flower photographs here to show what I mean.

For those interested in seeing petroglyphs, head for the area along Black Butte Dam Road about a mile shy of Whitney Pockets coming in from the north. The petroglyphs were created by past Paiute Indians, and several of the panels are quite striking.

Right now there is a paucity of information about Gold Butte and its backcountry. The largest source of information is Jim Boone’s site http://birdandhike.com. Boone is a local to the area who has done quite a bit of exploration and has provided some useful maps online. In terms of maps, USGS topos are essential. I found, additionally, the National Geographic “Lake Mead National Recreation Area” map to be very useful. Be prepared, however, to do plenty of navigation work. There are many roads on the maps that are not on the ground, as well as roads on the ground that are not on the maps. And even though there may be a hiking route marked on a map, you’ll often be hiking over land as there are very, very few established trails, much less trails that are maintained. The BLM has created a map that provides a general overview of the monument.