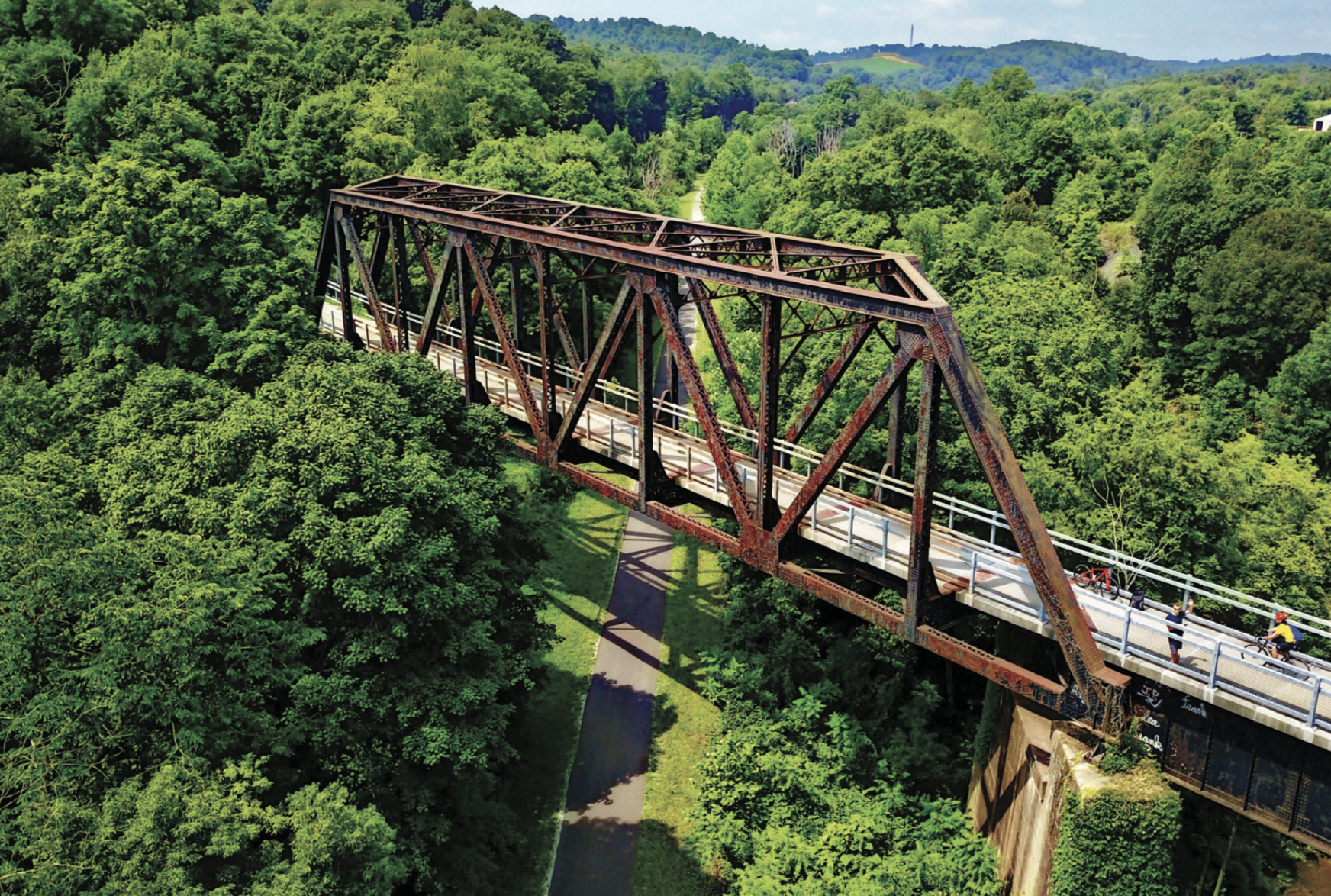 Explore These Pennsylvania Trails on the Great American Rail-Trail

The newly-announced Great American Rail-Trail stretches across 12 states and 3,700 miles. While Pennsylvania only includes 172 of those miles, they’re all on four already-established rail-trails.

This means you can spend the summer getting a taste for the Great American Rail-Trail by hiking, cycling, inline skating, running, horseback riding the four rail-trails, or going a long adventure and connecting the trails together.

Conveniently, the Rails-to-Trails Conservancy and our sister imprint Wilderness Press just published the new Rail-Trails Pennsylvania guidebook. Pick up a copy at your local independent bookstore, throw it into your pack, and hit the trails!

Ever since the Great Allegheny Passage (GAP) opened in 2007, overnight bicycle riders and backpackers have flocked to the 150-mile rail-trail in Western Pennsylvania. The welcoming small towns along the route lure travelers with lodging, camping, markets, and dining. Trail users marvel at the awesome scenery along one of the longest rail-trails in the United States. The biggest allure might be the ability to travel off-road for 334 miles all the way from Pittsburgh to Washington, D.C., when combining the GAP with the Chesapeake & Ohio Canal National Historical Park (C&O Canal Towpath) in Cumberland, Maryland.

The route mainly follows old railbeds between Pittsburgh and Cumberland, in many cases alongside scenic rivers and streams. There’s a slight but steady grade from Pittsburgh to the Big Savage Tunnel at mile 126; westbound travelers will experience a steeper grade in the 24 miles they have to reach the tunnel from Cumberland. Abundant historical sites from the French and Indian Wars, as well as from the era of western expansion, can be found.

While most users are on foot or bike, equestrians are allowed on grassy adjacent paths between Boston and Connellsville, Rockwood and Garrett, and the Pennsylvania–Maryland state line to Frostburg, Maryland. Cross-country skiing and snowshoeing are popular wintertime pursuits. Before setting out, it’s a good idea to check the GAP website for local trail conditions, as well as for opportunities for dining, lodging, and shuttle services.

Three Rivers Heritage Trail features the best that the city of Pittsburgh has to offer, connecting major cultural venues, the downtown area, historical sites, and some of the city’s most well-known neighborhoods and parks along more than 20 miles of riverfront trails. Extended outward in three major paved, connected segments from Point State Park, the urban trail parallels its namesake three rivers—the Allegheny, Ohio, and Monongahela— that helped lift the city into prominence as America’s once industrial powerhouse.

Pittsburgh boasts more than 440 bridges, and several of the city’s most iconic in this category serve as connectors for the trail’s various segments. Managed by the nonprofit Friends of the Riverfront, the Three Rivers Heritage Trail also shares a corridor with, and links to, one of America’s most well-known rail-trails, the 150-mile Great Allegheny Passage, and serves as a major spine for the Industrial Heartland Trails Coalition’s developing 1,500-mile trail network through Pennsylvania, West Virginia, Ohio, and New York.

The 61.5-mile Montour Trail follows most of the former Montour Railroad’s main line west and south of Pittsburgh. This little short line was incorporated during the late 19th century and, despite its small size, became very profitable thanks to the many coal mines once located along its main line. It also benefited from having interchanges with most of the region’s notable railroads. In later years, the Montour became a subsidiary of other larger systems. When coal mines closed over the years, the railroad found itself in a difficult position and was finally forced to shut down during the mid-1980s.

Forming a semicircle around Greater Pittsburgh, the corridor now helps host one of the longest suburban rail-trails in the United States, featuring a selection of bridges, trestles, viaducts, and tunnels framed by colorful Western Pennsylvania landscapes and vegetation. The trail is also part of the Industrial Heartland Trails Coalition’s developing 1,500-mile trail net- work through Pennsylvania, West Virginia, Ohio, and New York. The surface is primarily crushed limestone, with small sections of paved trail in Peters Township and Clairton, some on-road trail between South Park Township and Clairton, and a mostly on-road spur to Pittsburgh International Airport.

The Panhandle Trail offers the most direct and scenic route for self-propelled travel between the Pittsburgh suburbs and West Virginia. Although the trail follows an old railroad grade through the hilly terrain, there was only so much the railroad builders could do to flatten the route. Expect a steady climb to the town of Midway, the high point on the rural journey.

This route was made famous by the merger of several railroads in the 1860s to create the Pittsburgh, Cincinnati, Chicago and St. Louis Railway (PCC&StL), or simply the Panhandle Route. It was named for the sliver of northern West Virginia it crossed on the way to Ohio. The Pennsylvania Railroad leased the route in the 1920s, and the line later became part of the Penn Central and Conrail systems until it fell into disuse in 1991.

The 29-mile trail is maintained by several communi- ties and organizations along the way. Starting at the old Walkers Mill station about 10 miles west of Pittsburgh, the trail passes through a succession of small towns that become farther apart as you head west. The Panhandle Trail crosses the 61.5-mile Montour Trail, which links to the 150-mile Great Allegheny Passage and the 184.5-mile C&O Canal Towpath for an off-road connection to Washington, D.C. Horseback riding is allowed in the corridor in Pennsylvania, but not on the trail itself.