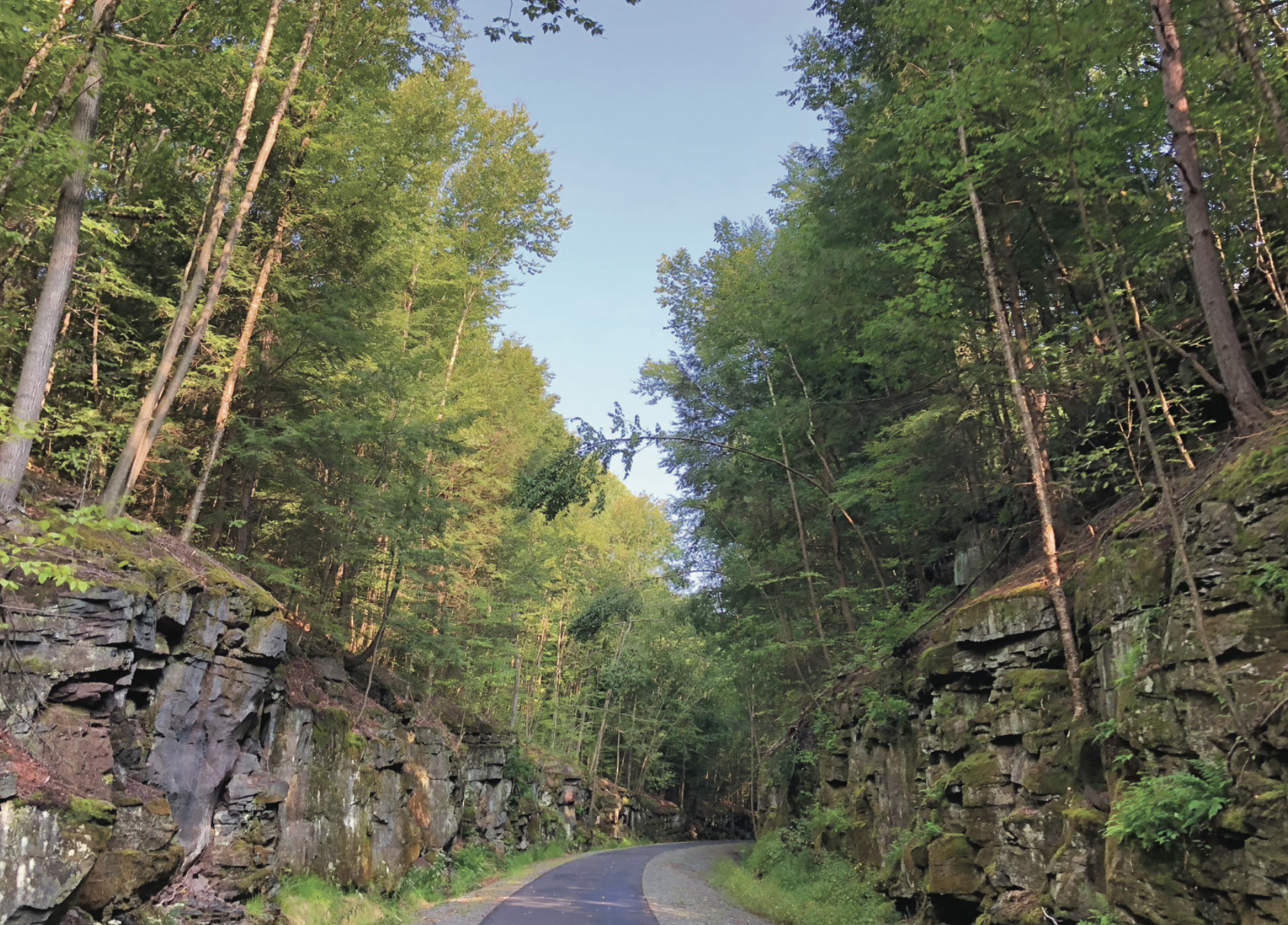 The Best Rail-Trails to Bike in New York

Grab a copy of the new Rail-Trails New Jersey & New York, and start exploring the Empire State by bike.

Visitors can expect a couple of easy climbs as they travel on the Warren County Bikeway through the southern Adirondacks for 10 miles between Glens Falls and Lake George. It’s well worth the effort, as visitors are rewarded with scenic views, ice cream stands, and the opportunity for a dip at a Lake George beach. Note that dogs are prohibited on the trail.

The area’s combative early history is reflected in names like Old Military Road, Bloody Pond Road, and Lake George Battlefield Park. In fact, a cave on the Hud- son River in Glens Falls inspired James Fenimore Cooper to write The Last of the Mohicans, a historical novel about the French and Indian War, in 1826.

The trail is among the earliest rail-trail conversions, with the project beginning in 1978. It follows a branch of the Delaware & Hudson Railroad, which carried vacationers from the main branch to resorts and steamboat connections on the 32-mile-long Lake George. The trail’s terminus in Glens Falls is about 0.1 mile north of the Feeder Canal Park Heritage Trail, which connects to the Champlain Canalway Trail. The latter pathway is part of New York’s developing Empire State Trail system, which will span 750 miles.

The O&W Rail Trail provides a glimpse into the area’s history from the perspectives of both a historical canal and a railroad. The Delaware & Hudson (D&H) Canal carried coal from Honesdale, Pennsylvania, to Kingston, New York, for the New York City and Albany markets from 1828 to 1898. The canal was shut down in favor of the New York, Ontario and Western Railway, more commonly known as the O&W (and nicknamed the Old and Weary), which was in use until the mid-20th century. A major carrier of anthracite coal, the O&W was also an important carrier of milk and dairy products, as well as urban tourists seeking the fresh air of resorts and farmhouse boarding.

Today the trail is open in several disconnected sections, with 16.7 miles of trail open in Ulster County and another 9.2 miles available in Sullivan County. Note that the O&W Rail Trail does not connect across county lines.

When complete, the Erie Canalway Trail will run 365 miles in Upstate New York—from Buffalo in the west to Albany in the east—linking many other communities along the way, including Rochester, Syracuse, Rome, Utica, and Schenectady. The route currently comprises nearly 292 miles of open trail and has a few remaining gaps. In 2018, a 5-mile gap on the eastern side of the trail was closed when a new section of the trail opened between Amsterdam and Pattersonville.

As most of the trail follows these canal and rail corridors, it is nearly level, with an average grade of 1%. A few steeper grades and hill climbs can be found in the Mohawk Valley section on the trail’s eastern half. Large sections of the path are surfaced in stone dust from crushed limestone; however, some stone- dust sections are being converted to asphalt paving. A range of bike types— including mountain and hybrid bikes, as well as road bikes equipped with wider tires (28 millimeters or more recommended)—can be used effectively on the trail. The two longest paved sections are at either end of the trail: from Albany to Schoharie Crossing and from Buffalo to Pendleton.