60 Hikes Within 60 Miles of Boston

While at this point, I have completed my writing and editing for the second edition of 60 Hikes within 60 Miles of Boston (that loud raucous noise you may have heard the first weekend of November was me celebrating!), I will continue to feed you these previews! We’re into the final third of the 60 hikes with these ones:

History buffs will dig the Dogtown Commons hike. The story of Dogtown Commons goes way back, has many twists and turns, and is more than a little bizarre. Here’s an excerpt from the Essex Heritage web site: “Originally settled in 1693 because its rocky, inland location offered protection from pirates and enemy natives, this abandoned settlement called Dogtown is one of the Essex National Heritage Area’s hidden gems. Dogtown is known for its charming woods, giant boulders and rock formations left behind when the last glaciers melted. As legend has it, Dogtown earned its strange name from the dogs that women kept while their husbands were fighting in the American Revolution. Falling into decline as settlers moved towards the harbor, Dogtown has been hauntingly abandoned since 1830. Today Dogtown offers miles of trails and abandoned roads that traverse nearly 3,600 acres. Pathways are dotted with three dozen boulders into which unemployed Finnish quarry workers carved inspiring sayings during the Great Depression. This progressive public art work was commissioned by Gloucester philanthropist and founder of Babson College, Roger Babson. Notice that numbered cellar holes of original settlers are also visible, marking former homes.”

Dogtown Commons is well worth an afternoon of explorations. One other note: bring a map, bring a compass (and know how to use them), bring plenty of water. The trails are not all that well marked, and it seems fairly easy to get turned around in here. Plus, it’s a fairly large area, so if you pop out of the woods on the wrong side, that could be a fairly inconvenient “oops.” Ravenswood Park is simply gorgeous. The character of the forest, the border of the Magnolia Swamp, the rock formations, Fernwood Lake, the old quarry, and views of Gloucester Harbor. If this was in my backyard, I’d be there every day. I was joined on this hike by my good friend Lisa Marshall, who grew up on the North Shore, and had never been here. We did this and Dogtown Common on the same day. We went from floundering around Dogtown never 100 percent sure where we were, to being spot on in Ravenswood. The trails are quite well-defined and well-marked, and I had a great map. Both hikes were great, but Ravenswood Park is definitely now on the list of favorite places.

Two funny things happened on this hike. We were fairly early into the hike, we had just begun traversing the Magnolia Swamp. We heard this strange voice behind us that sounded like chanting. As it got closer, we saw it was this guy just singing at the top of his lungs. He saw us and stopped. I immediately told him, “Don’t stop singing on my account!” He started right up again. That guy was wild!

Then later in the hike, I was approaching a long boardwalk that traversed a dark muddy bog. Two dogs approached from the far side—a German Shepherd and some little fuzzy white dog. I withdrew to let them pass. The German Shepherd gets to bridge and stops. The little white dog goes blazing right into the black mud! He looked like he had been used to clean up after an oil change. I saw their humans on the next hill, and informed them their white dog was no longer white. The woman just slowly shook her head and groaned. Ah well… This is another addition to the favorite spots list. The incredibly diverse character of Willowdale State Forest is what really struck me here. You hike past swampy sections, deep dark groves of conifers and along glacial eskers punctuated by tall stately birch and beech. Like many state forests, state parks, and other lands managed and maintained by the Massachusetts DCR, the trails themselves are a fascinating mix of wide carriage road type trails and classic twisty narrow hiking trails. All intersections are pretty well-marked, so if you’re armed with a map, it should be pretty easy for you to accurately locate yourself within the forest. And this is a good-sized forest, so you can spend a long day exploring the woods here. This former farmland is another spot straight out of Winnie the Pooh’s 100 Acre Woods. You start off hiking between tall columns of stately deciduous trees that lead you across a large grassy field. As you enter the woods, you’re still hiking on what seem like impossibly wide carriage roads that wind in all directions. And indeed, the term “grass rides” is a British term for carriage roads—a delightfully colonial holdover from the times when horse-drawn carriages brought well-heeled gentlemen farmers on a through the woods.

There are also plenty of narrower classic hiking trails, one in particular that follows an old stone wall up to an open field marked with spectacularly huge trees and a stone memorial. It’s well worth building in some time to just relax on the field atop this hill before continuing on through the rest of the forest. This is also fairly gently hiking, so it’s perfect if you have young kids, and of course dogs! A hike doesn’t have to be particularly long or challenging to be truly restorative. The Great Meadow hike certainly qualifies there. After traversing a long grassy field, you’ll come to the banks of the Parker River and the surrounded marshlands. There are several spots to sit on a rock or sit by the riverbanks and just enjoy being there. If you ever go, I suspect you’ll spend a lot more time just relaxing than you did hiking to get there. There are several houses that line the short driveway leading to the small parking area for this hike. I couldn’t help but think how lucky those folks are to have this gem in their backyards. 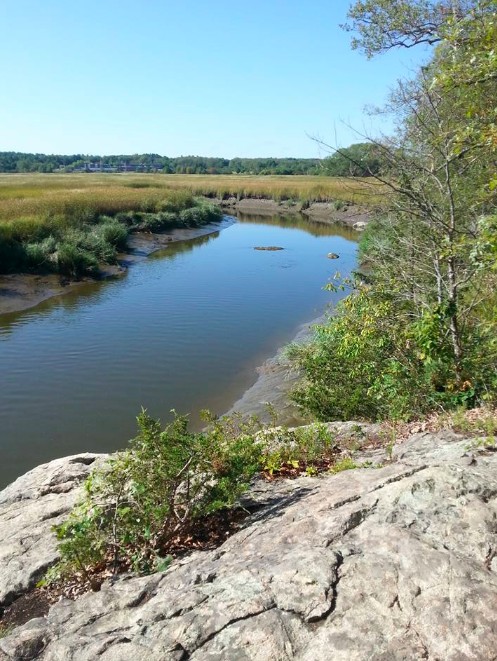